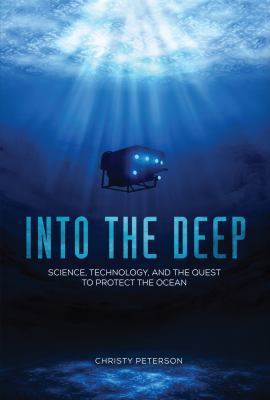 Into the Deep: Science, Technology, and the Quest to Protect the Ocean by Christy Peterson illustrate and discusses the various organisms and habitats of the marine environment, such as jellyfish, whose lives are not completely understood, as scientists had originally concluded that jellyfish were unable to be considered as being a source of food and prey regarding the various organisms of the ocean. Turtles and rockfish were also discovered to be one of the multiple organisms that depend on jellyfish as a source of food, based on samples of DNA originating from the bodies and systems of the organisms. Furthermore, this book also describes the connection between human society and the ocean since it states that humans from ancient civilizations and cultures, such as the Polynesian people, utilized the ocean as a method of navigation by reading and analyzing the currents of the oceans. This also indicates that humans have depended on the ocean as a method of navigation, as well as a source of food since communities and villages that were established along the coasts of the ocean utilized seaweed and salt to create tools and items, as well as to preserve food and to serve as a source of food. Additionally, this book also focuses on the experiments and research that was devoted to discovering the extent of the currents of the ocean, as this book mentions the experiment of Georg von Neumayer, an explorer, and a scientist, who placed bottles into the ocean to analyze and observe the currents of the ocean. Buoys were also created in an attempt to observe the path of the ocean currents, as they were designed to float on the surface of the ocean, similar to the bottles that were deposited previously. The currents of the ocean are also continuous, and they transport warm and cold ocean currents throughout the globe. However, climate change appears to have an adverse effect on the environment and the ocean currents, as this could cause a rise in the level of seawater at the poles, as a result of an increased rate of melting, due to the rising temperatures of climate change. Since this effect of climate change possesses the ability to alter the composition of the ocean, multiple “dead zones” could begin to form, and this negatively impacts the vast number of organisms that reside within the ocean, as it can decrease the levels of oxygen in the ocean environment, leading to a state that is referred to as “hypoxia.” Though fish are able to recover quickly from this condition, organisms such as crabs are unable to recover rapidly, due to being “slow-moving” in nature. Additionally, the scientists and researchers who participated in this experiment also analyzed samples from whales and other organisms to determine the effects of climate change concerning the ocean, such as an increase in “blooms” of algae, which possess the potential to become toxic to the marine environment, even though coral depend on algae in a symbiotic relationship. The conclusion of this book states that in order to save the ocean from the detrimental effects of climate change, the people of a society are required to convince the officials of the government to realize that the ocean is required to be protected from experiencing and enduring the effects of climate change.

I thought that this book was insightful, and it also introduced me to a new perspective regarding the effects of climate change since I was previously unaware that “hypoxia”, low levels of oxygen, could result from the impact of climate change, as I had previously thought that the primary effects of climate change concerning the ocean were rising seawater levels and an increase in the number of bleached corals. Regarding the plot and the setting, I considered the plot to be extensive and persuasive, as the book provided a vast amount of information regarding the organisms that reside in the various zones of the ocean, such as the epipelagic zone and the bathypelagic zone. This book also incorporated a large number of experiments that were conducted regarding the health and condition of the ocean, as well as various experiments that analyzed the path and extent of the currents of the ocean. This is indicated by the usage of buoys to analyze the path of the ocean currents and to prove that they are continuous. I also obtained new knowledge from this book since I previously was unaware that scientists had previously assumed that jellyfish did not possess any predators and that samples from multiple organisms had indicated that they had consumed jellyfish, such as samples from sea turtles, albatrosses, and rockfish. Therefore, this book was an eye-opening experience, and it also allowed me to experience a new perspective concerning the effects of climate change on the ocean.